The major developments, the megatrends that are shaping the early 21st century, these are the topics to which we dedicate our work as a commissioned film production:

global health, trade justice, bio economy or the future of liberal democracies – we make stories out of them. At a high level of craftsmanship and with the unconditional will to transform even very complex content into exciting, tangible, but never banal stories.

We design and produce for state institutions as well as for NGOs and corporations, in Germany and internationally and, if necessary, in 9 different languages.

Our goal is to produce sophisticated films of any length that bring relevant topics to the audience – on the web, in cinemas or in live formats. Arne Dechow
Writer & Director
Arne studied literature, history and philosophy at the University of Karlsruhe. At the Badisches Staatstheater he worked in parallel as an assistant director for two years. He then directed plays, operas and play developments, among others at the theatres in Würzburg, Nordhausen, Kassel and Wiesbaden. Two years as creative director of the production company Atkon AG followed before he founded INVOLVE in 2004. In addition to his work at INVOLVE, Arne was the artistic director of Die WERFT, a highly acclaimed cultural project in the Wiesbaden prison, for twelve years. He also makes documentaries, writes stage plays and screenplays, most recently the multi-award-winning feature film »Toubab«. Peter Fanai
Cutter & Head of Postproduction
Peter completed his training as a media designer for image/sound at Magenta TV in Wiesbaden. He gained a lot of experience in editing, but also behind the camera, during his years at the former Frankfurt music TV station iM1. After some time there, he took over the management of the production department, coordinated the shoots and post-production and was responsible for quality control. Peter first came to INVOLVE in 2015 as a freelancer before moving to Munich as an editor in the fashion and beauty industry. In 2017, we were able to lure him back from Bavaria. In his private life, he is playing synthesizers and loves listening to radio plays. Since 2019, Peter has been an IHK-certified trainer for media designers image/sound. 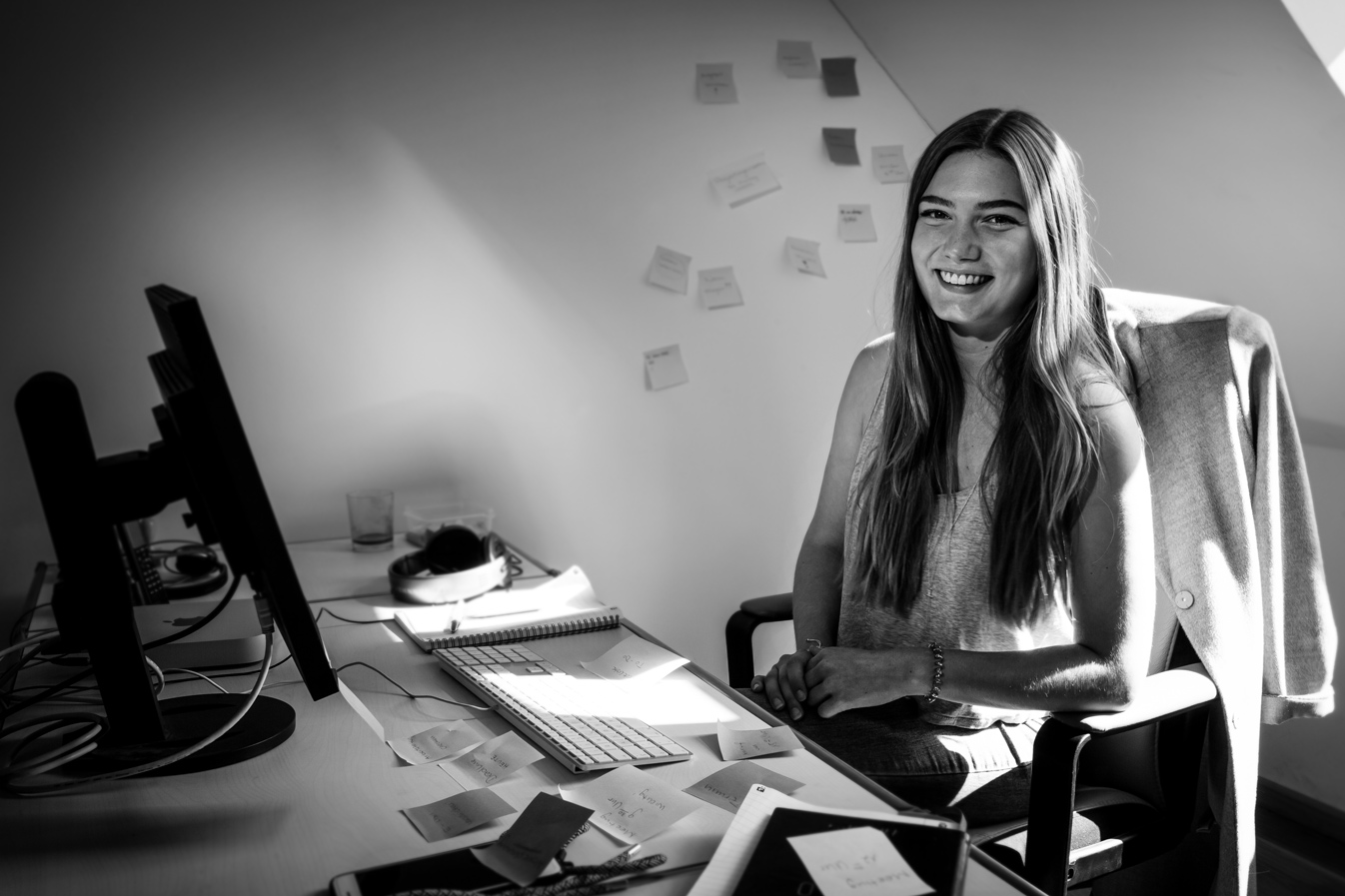 Sarah Kees
Creative Producer
2016 Sarah studied Media: Conception & Production at the Hochschule RheinMain in Wiesbaden. There she experienced practical relevance through larger film projects during her studies and found her enthusiasm for project organisation. After various internships at home and abroad in the areas of marketing and social media, she joined INVOLVE in 2019, initially as a working student. She has been a permanent member of the team since 2020. As a producer, she takes care of customer communication, project conception and filming organisation. When the project demands it, she is also its very accomplished camera operator. In her private life, she likes to visit rustic cafés and enjoys long summer evenings outdoors. Jerija Bengi
Director & Cinematographer
Jerry came to film via music. Born in Congo, the director and camera operator first studied media design in Mainz with a focus on time-based media. He completed his Bachelor’s degree with the film »Mabuja – Female Boss«, an impressive documentary about female entrepreneurs in Rwanda. After numerous freelance projects as a camera operator, cutter and assistant director, he completed a Master’s degree at the FH Dortmund. Jerry has a soft spot for the US series »Atlanta« and »Shameless« and is convinced that »bad catering can ruin the best film« – which shows that despite his youth, he already has the experience of an old hand. Ghaleb Safi Al Asali
Media designer image/sound (in training)
Before Ghaleb came to Germany in 2015, he successfully completed his studies in economics in Damascus, which he financed by working for a photographer. From 2016 to 2017, he completed a federal voluntary service at the Medienzentrum Rhein-Main, where he helped produce television formats. In 2018, Ghaleb came to INVOLVE for an internship and joined us in 2019 to train as a media designer for image and sound.
In his free time, he lifts weights, watches football and draws. Peter Protic
Editor
Peter is an INVOLVE veteran. He started as an assistant director at INVOLVE parallel to his studies in philosophy and Japanese studies in Tübingen. After studying in Latin America and Japan and successfully graduating, he returned to Wiesbaden to take over the project management of our long-term experiment Die WERFT.
His interest in complex involvement processes manifested itself in a second degree in psychology at the University of Mainz.
Thanks to Peter, we are able to communicate natively with partners and clients in East and West, in addition to German, English and French-speaking projects: he speaks Japanese, Spanish, Slovakian and Hungarian, among other languages.

Mainz camera operator Harald Capota is a licensed drone pilot. He is a high-speed specialist and experienced in forestry. But above all, he has a great sense for sophisticated video storytelling.

The Wiesbaden-based design and communications agency New Cat Orange has been our partner for many years when it comes to cross-media strategies and campaigns.

We not only share the mill house with the illustration and animation studio White Rabbit. For complex motion design and compositing, we have a well-established partner in house.

For almost 20 years now, the company Pille Filmgeräteverleih has supported us in the conception of elaborate set-ups and is also a reliable cooperation partner in the training of young media designers.

We use cookies on our website to give you the most relevant experience by remembering your preferences and repeat visits. By clicking “Accept All”, you consent to the use of ALL the cookies. However, you may visit "Cookie Settings" to provide a controlled consent.
Cookie SettingsAccept All
Manage consent

This website uses cookies to improve your experience while you navigate through the website. Out of these, the cookies that are categorized as necessary are stored on your browser as they are essential for the working of basic functionalities of the website. We also use third-party cookies that help us analyze and understand how you use this website. These cookies will be stored in your browser only with your consent. You also have the option to opt-out of these cookies. But opting out of some of these cookies may affect your browsing experience.
Necessary Always Enabled
Necessary cookies are absolutely essential for the website to function properly. This category only includes cookies that ensures basic functionalities and security features of the website. These cookies do not store any personal information.
Non-necessary
Any cookies that may not be particularly necessary for the website to function and is used specifically to collect user personal data via analytics, ads, other embedded contents are termed as non-necessary cookies. It is mandatory to procure user consent prior to running these cookies on your website.
SAVE & ACCEPT